In partnership with Sphinx Organization, Classical Tahoe welcomes eleven Black and Latinx musicians to be in residence as the inaugural Fellows of the Classical Tahoe Academy for the entire three-week Festival to rehearse and perform with the Classical Tahoe Orchestra and take part in a customized experience of mentoring, networking, and audition preparation.

These musicians were finalists in the Sphinx Orchestra Partners’ Excerpt Competition (SOPA). Academy Fellows are professional-level musicians currently auditioning for top-tier orchestras. The ultimate goal of the initiative is job placement for musicians of color in American orchestras. 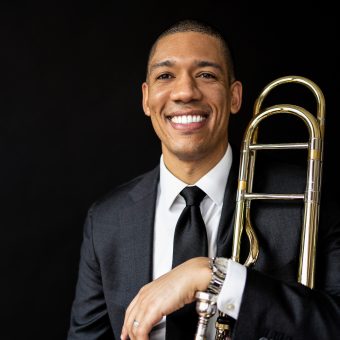 Classical Tahoe and Sphinx Organization have positive synergies in our shared musical ambassadors. A special thanks to Weston Sprott (pictured at left) for spearheading this initiative and facilitating the connection between organizations.

“For the last five seasons, I have performed at Classical Tahoe alongside fellow Sphinx family members Billy Hunter, Demarre McGill, and George Taylor. The level of playing at Classical Tahoe is world-class, and the intersection of top-level players from across the industry is incredibly unique. For nearly a quarter of a century, the Sphinx Organization has worked to create career pathways and champion the artistry of Black and Latinx musicians. The Classical Tahoe Academy will build on the Festival’s tradition of musical excellence, expand its breadth, and play an integral role in shaping the future of the art form.”

– Weston Sprott, Classical Tahoe and Metropolitan Opera Orchestra trombonist, Recipient of the Sphinx Medal of Excellence, Member of Sphinx’s National Advisory Board, Dean of the Preparatory Division at the Juilliard School.

The Academy Fellows will perform in three concerts with the Classical Tahoe Orchestra, and will be featured in two chamber music concerts: the 10th Anniversary Celebration concert on August 10th, and with the Brubeck Brothers Quartet for jazz-classical fusion at the Summer Gala on August 15th.

All orchestra concerts will be live streamed from the Classical Tahoe website. See link below for more information!

The Academy is made possible by FS Foundation, Leslie Wittmann & Michael Blaszyk, and Sphinx Organization.