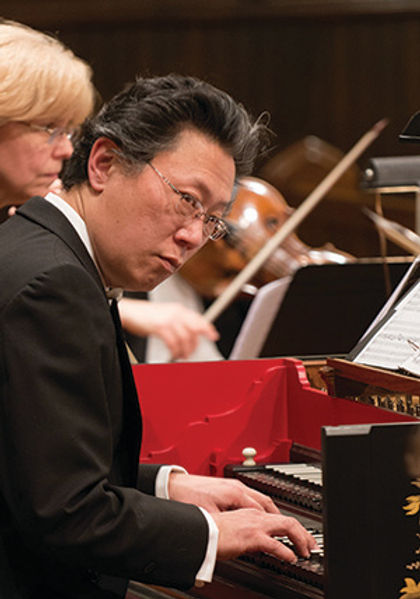 Dongsok will be a featured soloist with on Bach’s Brandenburg Concertos on Tuesday, August 2.

Dongsok Shin was born in Boston and played the modern piano from the age of four. Since the early 1980’s, he has specialized exclusively on harpsichord, organ, and fortepiano.

Much in demand as a soloist and continuo player, Mr. Shin has appeared with the American Classical Orchestra, ARTEK, Concert Royal, Early Music New York, Carmel Bach Festival, Mark Morris Dance Group, the New York Philharmonic, the Orchestra of St. Luke’s and the Orpheus Chamber Orchestra. He has toured throughout North America, Europe, and Mexico, has been heard on numerous radio broadcasts nationally and internationally, and has recorded for ATMA Classique, Bridge Records, Dorian/Sono Luminus, Hänssler Classic, Helicon, Lyrichord, and Newport Classic. He was a founding member of the Mannes Camerata, receiving international critical acclaim as music director for their productions of early baroque operas, and he was a member, as well as a guest director of NYS Baroque in Ithaca, NY.

In his spare time, he tunes and maintains harpsichords in the New York area (he is the harpsichord technician for the Metropolitan Opera and tuner of the antique keyboards at the Metropolitan Museum), and he is well known as a recording engineer, producer and editor of numerous early music recordings. He is married to early keyboard player and director of ARTEK, Gwendolyn Toth, and they are the proud parents of three children and one new cat.