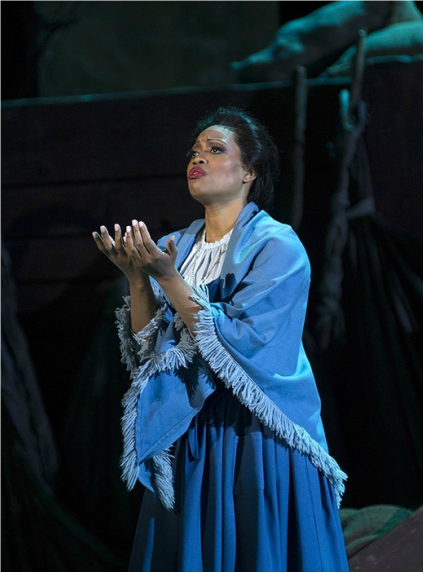 Laquita will be soloing with the orchestra on Friday, July 30 .

In her compelling debut as Bess in Porgy and Bess with the San Francisco Opera, Opera News said “Soprano Laquita Mitchell, in her first outing as Bess, dazzled the SFO [San Francisco Opera] audience with her purity of tone and vivid theatrical presence.” She has since reprised the role with New Jersey State Opera, the Atlanta Opera; Madison Symphony, the Boston Symphony Orchestra (at both Tanglewood and Symphony Hall), and also the Robert Russell Bennett Porgy and Bess Suite with the Cleveland Orchestra, Santa Barbara Symphony, Sheboygan Symphony and with the Polish Chamber Philharmonic Orchestra in Sopot, Poland.

Hailed in the New York Times for her portrayal of Violetta  in Verdi’s “La Traviata” in New York City Opera’s 2012 season opener said “Ms. Mitchell’s voice is rich, shimmering and sizable, her singing was tender and expressive”.  Other notable appearances include Micaela in Carmen at the New York City Opera; Leonora in Il trovatore in South Carolina as well as with Nashville Opera; the role of Sharon in Terrance McNally’s Master Class at the Kennedy Center; Musetta in La bohème in a return to the Los Angeles Opera; Mimì in La bohème with Cincinnati Opera and at the Utah Symphony and Opera; Donna Anna in Don Giovanni with Florentine Opera, Portland Opera; and Donna Elvira in Don Giovanni with Opera New Jersey.

Also active as a concert artist, Ms. Mitchell most recently performed Barber’s Knoxville: Summer of 1915 with the Louisville Orchestra, the world premiere of Steven Stucky’s August 4, 1964 with the Dallas Symphony Orchestra under Jaap Van Zweden, her Boston Symphony Orchestra debut as the soprano soloist in Wynton Marsalis’ All Rise under Kurt Masur, and the soprano solo in Tippett’s A Child of our Time with the Washington Chorus at the Kennedy Center. She has also performed with the Philadelphia Orchestra, New Jersey Symphony, the Princeton Symphony Orchestra, the New York Symphonic Ensemble at Alice Tully Hall, with Branford Marsalis and the Garden State Philharmonic, and with the New York Festival of Song “Salute to Arlen” concert at Carnegie Hall. Ms. Mitchell made her debut with the New World Symphony in Alberto Ginastera’s: Cantata para la America Magica. Ms. Mitchell returned to the Cincinnati Opera in the role of Micaela in Bizet’s Carmen. She also was featured in the Cincinnati Opera’s Park Concert Gala held at Washington Park in downtown Cincinnati. In the summer of 2014, Ms. Mitchell was asked to give a solo recital with accompanist Craig Terry for the Television Critics Association in Los Angeles, California under the auspices of PBS. Fall of 2014, Ms. Mitchell joined Beth Morrison Projects for David Lang’s The Difficulty of Crossing a Field  in the role of Virginia Creeper. Ms. Mitchell recorded The Difficulty of Crossing a Field  as well as performed the piece for NPR radio at Roulette performance space. She recently made her debut with the Philadelphia Orchestra under Maestro Yannick Nezet-Seguin in the 2015 Salute to Dr, Martin Luther King Jr. at Girard College. Ms. Mitchell’s 2015-2016 season begins with an appearance in two recitals with Collaborative Arts Institute of Chicago, performing works by Samuel Barber, John Carter and Lee Hoiby. Ms. Mitchell made her New York Philharmonic debut this fall of 2015  “In Their Footsteps: Great African American Singers and Their Legacy“.  This special two day event celebrates ground breaking soloists who have influenced generations of singers. She was the soprano soloist in the Brahms Requiem with the Color of Music Festival in Charleston, South Carolina. Ms. Mitchell will also sing the soprano solos in Mendelssohn’s Elijah with Princeton ProMusica. She then made her official debut with the Philadelphia Orchestra under Maestro Yannick Nezet-Seguin in the world premiere of “One Land, One River, One People” by Hannibal. Ms. Mitchell then made her debut with the Detroit Symphony Orchestra in their Classical Roots Concert Honoring Jessye Norman, conducted by Roderick Cox, singing the Four Last Songs by Richard Strauss. She then sings the role of Bess from Gershwin’s Porgy and Bess with Marin Alsop and the Baltimore Symphony Orchestra.
Ms. Mitchell’s 2016-2017 season began with the Opening night of the Philadelphia Orchestra’s 50th Anniversary at Saratoga Springs Performing Arts Center, conducted by Stephane Deneve. Mitchell sang excerpts from Hannibal’s “One Land, One River, One People” and was the soprano soloist for Beethoven’s Ninth Symphony. Ms. Mitchell debuted with the Arizona Opera in their 45th Anniversary Sapphire Celebration singing excerpts from Verdi’s Aida and Puccini’s La Boheme and Turandot. She returns to Chicago where she was heard in recital at Roosevelt University with pianist Shannon McGinnis. She also made her role debut as the Countess in Mozart’s Marriage of Figaro with the Toledo Opera. In the early Spring 2017 Ms. Mitchell  returned to the Sheboygan Symphony Orchestra for an evening of Opera Arias and Choruses. Ms. Mitchell made her Hungarian debut in June of 2017 in the role of Bess in Gershwin’s Porgy and Bess at the St. Margetsziget Festival.
Ms. Mitchell’s 2017-2018 season includes a return to the role of Violetta in Verd’s La Traviata at Opera Memphis. She make debut’s with the Berkeley Symphony Orchestra (Beethoven: Symphony No.9) and the Allentown Symphony in a salute to Bernstein and Gershwin, and much anticipated debut with the Oratorio Society of New York in the world premiere work “Sanctuary Road” by Paul Moravec. Ms. Mitchell will also create the role of Coretta Scott King in Douglas Tappin’s “I Dream” with Opera Grand Rapids, Toledo Opera, and Opera Carolina.

Laquita Mitchell is a Metropolitan Opera National Council Auditions Grand Prize Winner, and was awarded a 2004 Sara Tucker Award. She was also the First Prize Winner of the Wiener Kammer Oper’s 2003 Hans Gabor Belvedere Competition, and the First Prize Winner of the Houston Grand Opera Eleanor McCollum Competition for Young Singers, as well as the winner of the Audience Choice award. Ms. Mitchell is an alumna of the San Francisco Opera’s Merola Program and the Houston Grand Opera Studio. She completed her Master’s and the Professional Studies Certificate at the Manhattan School of Music, and completed her Bachelor’s at Westminster Choir College. Ms. Mitchell is the recipient of the 2010 Distinguished Young Alumni Award from her alma mater the Manhattan School of Music. In May of 2015 Ms. Mitchell will receive the Alumni Award from her undergrad Westminster Choir College. In March of  2014 Ms. Mitchell can be seen in the San Francisco Opera’s DVD of Gershwin’s Porgy and Bess in the role of Bess.