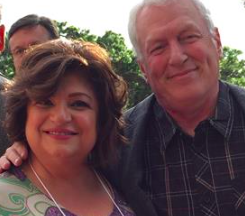 Nora Lacey, born Nora Betyousef, is an accomplished scientist, business-owner and philanthropist. She graduated from San Jose University in 1989, double majoring in both Biological Sciences and Business Administration, with a minor in Chemistry. For five years after she graduated, Lacey worked for a diagnostic manufacturing company in the Bay Area, BioGenex Laboratories, as a scientist and then later as a technical sales representative. This experience dove-tailed into her starting her own company, Cell Marque Corporation, in 1994.

Cell Marque is known world-wide as one of the leaders of advanced histopathology reagents which supplies pathology labs with medical devices that help detect and screen cancer and infectious diseases. It is through the advanced staining technique of immunohistochemistry, a scientific approach which allows pathologists to visualize pathogenic cells under a microscope, that she built her company to what it is today. Lacey is the President and CEO of Cell Marque and is co-inventor of two United States patents.

Not only is Lacey passionate about her company and helping cancer patients throughout the world, but she is also very philanthropic. She dedicates her time to helping causes that affect her culture and heritage, the Assyrians, by being an active member of the Assyrian Aid Society, as well as a Quality Control Director for Mesopotamian Night, a non-profit performance art show whose proceeds go to helping Assyrian Christians in Iraq. In addition, she also helped found the Sacramento Assyrian Club, which promotes social interactions amongst local Assyrians and uses funds to help Assyrian refugees better acclimate to their new lives in United States.

Lacey is married to Dr. Michael Lacey, the Chief Medical Director and Pathologist at Cell Marque, and mother of two daughters. Sarah, an attorney and vice president at Cell Marque, and Roshel, a marketing manager at Cell Marque. She loves her toy poodle, Honey, and has no problem disregarding some not-so-sweet mannerisms because she finds her so cute. Lacey’s other hobbies include oil painting, classical music and her latest passion is exercising for a balanced life and to keep healthy.