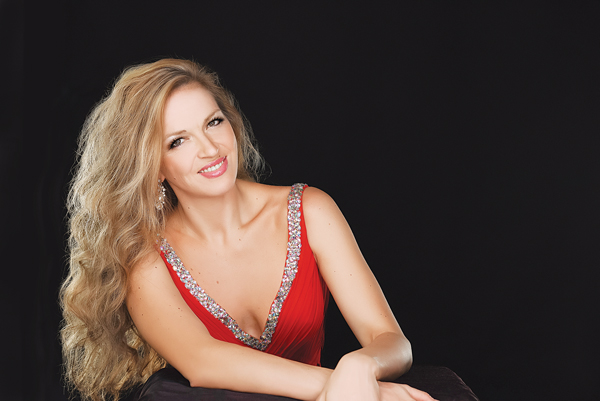 Be it genius or praxis, it is a special artist who holds a natural ability to communicate emotionally, intellectually and energetically through music.

“I really love playing,” says Svetlana Smolina, a Russian pianist born in the industrial city of Nizhny Novgorod, 260 miles east of Moscow along the Volga River. “It feels so natural for me to express myself and interact with the audience energy. It’s a drug effect almost. You get into this euphoria moment. The first few times got me into it. I’m not feeling anything like that, except when I perform.”

After being inspired by her mother who was a music professor, she began her piano studies at a young age. She attended both University of Indiana and Oberlin Conservatory in Ohio. She has resided in Manhattan for the past nine years while performing around the world with companies including New York Philharmonic and Orchestra National de France.

Under the idyllic pine trees of Sierra Nevada College, Smolina will play Sergei Rachmaninoff’s Piano Concerto No. 3 as part of Classical Tahoe’s eighth annual summer season from July 26 to Aug. 11 in Incline Village, Nev. The rarely performed piece written in 1909 is considered one of the most technically challenging pieces in the standard classical repertoire.

“I’m a very warm and romantic person,” she says. “I love playing Russian and Western romantic music. You could phrase everything how you feel, but it’s not about you. It’s about the composer. There’s a fine line between expressing yourself and speaking through the composer’s voice.”

She describes the experience of interpreting master works as simultaneously being three people in one: the composer, the musician and an audience member.

“When I connect with the composer, I fall in love the same way with the piece that I perform,” she says. “It’s always important to have respect for the composer, find what he thought and bring that sound to the listeners. It’s ecstatic and euphoric in unexplainable ways. We are connecting to the composer and expressing our personality at the same time. The fusion of all of this is when it goes to the listeners. You know that they are connecting and it is a really special feeling. Every style, every piece has a different message. Every time it’s never alike; you enter new ideas, a new expression, a new communication level.”

Earlier this month, Smolina was in Huntington, N.Y., gazing into the same Long Island harbor where Rachmaninoff once lived and composed his final works after having departed his mother country during the Bolshevik Revolution in 1918. Although perhaps not as well-known in America as other Russian composers such as Tchaikovsky and Stravinsky, the piano master is widely revered for his Symphony No. 2, Rhapsody on a Theme of Paganini and Prelude in C-sharp minor, which have been used extensively in Hollywood movies and other popular culture.

“He’s my ultimate pianist,” she says. “Listening to him perform his own works, his phrasing and sense of vibration is beyond this world.”

“Russian people are emotional,” Smolina says. “It comes into every composition. Russia has a very dark history of the culture. The way our people have grown through troubles and problems, we have overcome much more in our artistic way. Overcoming many, many obstacles in a way allows Russian composers to speak so strongly.”

Smolina arrives on the shores of Lake Tahoe a few days before her concert to rehearse with Maestro Joel Revzen and Classical Tahoe Orchestra. The two musicians first met in 2015 when the conductor attended one of her recitals at Carnegie Hall. It took several years to get her officially on the books and she is looking forward to finally making beautiful music with the world-class orchestra in which she has many friends from her musical life on the road.

“I’m hoping to make the best performance with a really special energy,” she says. “I invite everyone who reads this article to join us.”

On Aug. 4, Classical Tahoe Music Institute offers a Family Concert, “All About the Piano,” and a Music Maker Faire, a full day of family activities. The concert will feature Angel Wang, teenage winner of the inaugural Classical Tahoe Piano Competition, in performance with the Classical Tahoe Orchestra.

Both before and after the family concert, a free, hands-on Music Maker Faire will offer interactive booths from Discovery Museum, Nevada Museum of Art and Usborne Books. Ice cream will be available from Susie Scoops.