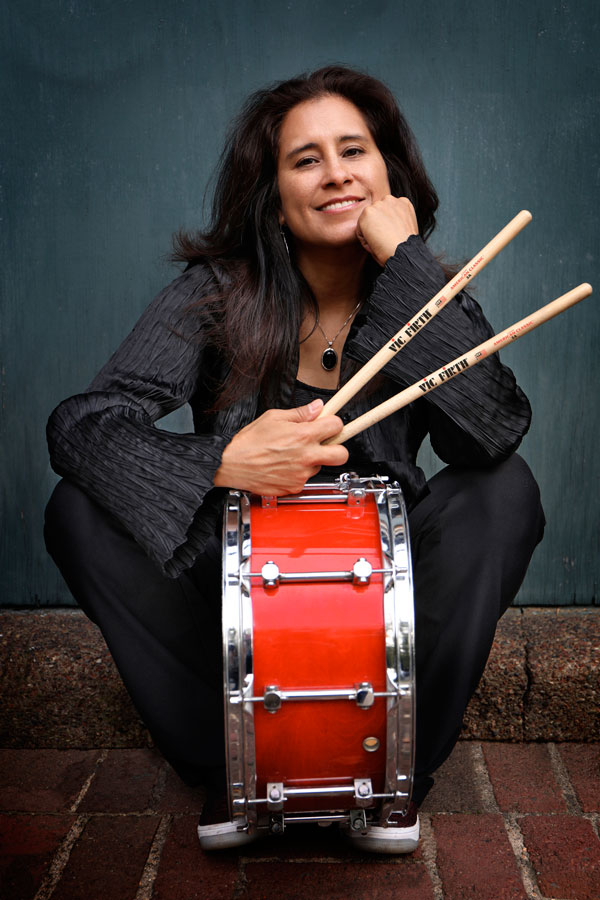 Brubeck Jazz Summit: Sylvia! Thank you for the wonderful opportunity to catch up. Let’s start with your introduction to jazz and your instrument.

Sylvia Cuenca: I’m originally from San Jose, California. The San Francisco Bay Area has always been a hub of diverse musical culture. My father played jazz guitar, my brother played guitar, bass, and mandolin, and my mother knew the lyrics to hundreds of songs. They were not professional musicians but their love of music allowed me to grow up in a house full of music either from the radio or from my father’s jazz record collection. So, my first exposure to jazz was growing up in this setting.

One special recording from my father’s collection was a Max Roach/Clifford Brown record called “Live at Basin Street”. I especially loved how hard Max Roach swung, and his approach to melodic comping and soloing. I was intrigued, and I started to listen to more jazz recordings and I even started my own collection. My father tried to give me guitar lessons but I always had my eye on the drum set.

When I was 11 or 12 years old, I had the opportunity to take a snare drum class in junior high school. I fell in love with the instrument and wanted to learn all that I could about it. I worked hard and moved from snare drum to the drum set quickly. When I got my first 4-piece green sparkle kit I used to practice for hours every day. I was very lucky to have incredibly patient and supportive parents that tolerated me practicing constantly.

At that point, I wasn’t thinking about this as a career. I just loved to play and discover new sounds, ideas, and grooves that I heard on recordings of the jazz greats. 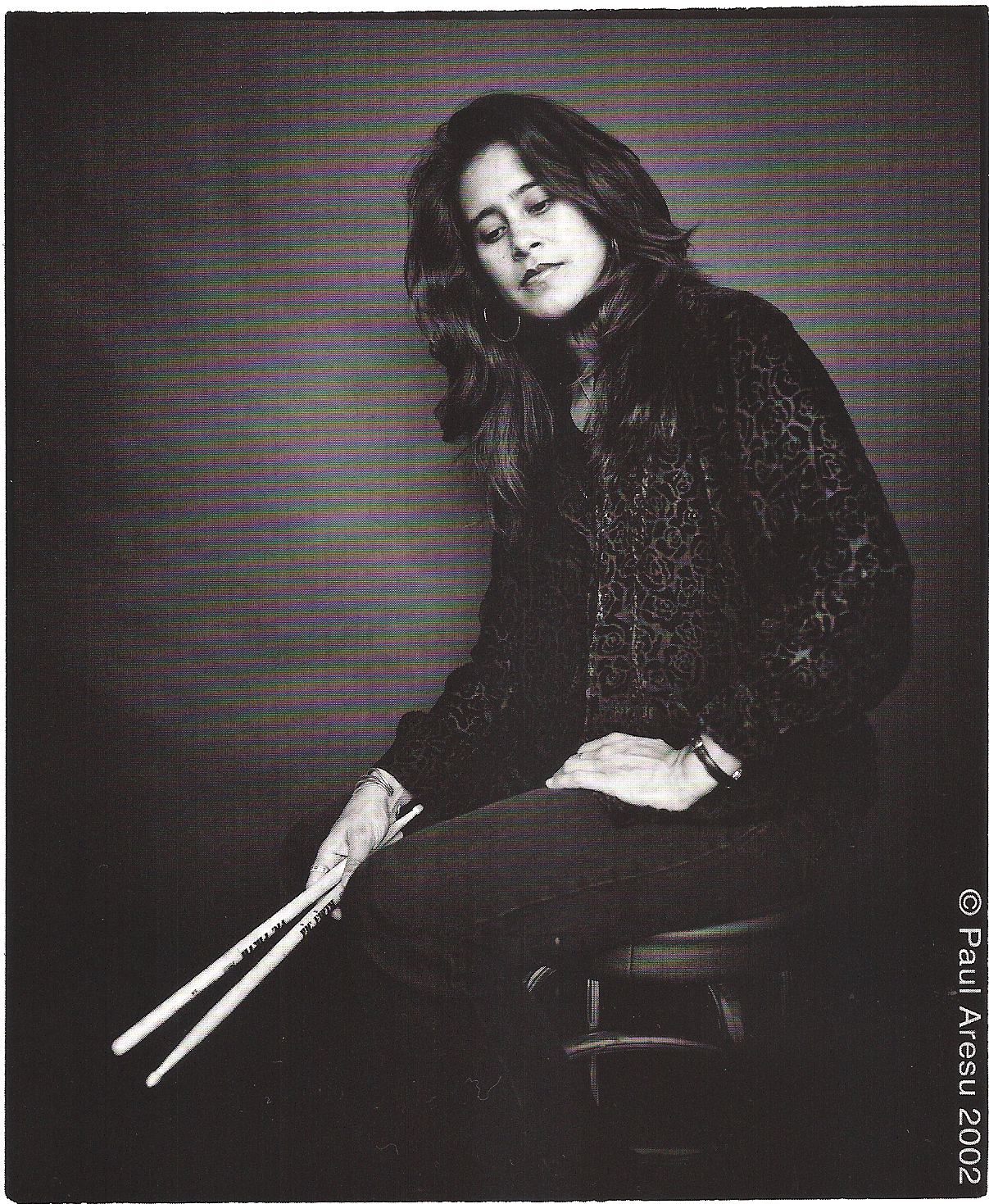 Brubeck Jazz Summit: What is your music education background?

Sylvia Cuenca: I started private drum lessons shortly after I started playing the snare drum in junior high. I continued to have private lessons throughout high school. In the summer of my senior year in high school, I attended San Jose City College which had a strong jazz program directed by trombonist/composer Dave Eshelman.

I studied theory and developed my sight-reading by playing in the combos and big band. Around the same time, I won a scholarship to attend the Stanford Jazz Workshop in Stanford, CA. Victor Lewis was the drum instructor and he had a profound effect on my playing and he was the one who encouraged me to move to New York City to pursue my career.

After I moved to NYC, I attended Long Island University and continued my music education under director Pete Yellin. After several semesters, I started touring and had to put my college degree on hold. When I was in town between tours I continued to study privately with Victor Lewis, Adam Nussbaum, Keith Copeland, and Brazilian drummer Portinho.

In 2014, I went back to school and completed my Jazz Performance degree from Empire State University in New York City.

Brubeck Jazz Summit: Can you tell us about how you learn and practice?

Sylvia Cuenca: When I moved to NYC in 1985 I was very lucky to have heard some of my biggest inspirations from recordings play live in clubs and concerts. I learned the most from listening and watching them close-up. I remember one night sitting right behind Elvin Jones at the Village Vanguard then going down the block to hear Billy Higgins with Cedar Walton trio at Sweet Basil then join the late-night hang at Bradley’s where all the great musicians would gather after their gigs and occasionally sit-in. There was no substitute for watching these masters live and seeing how they got their sound, the way they interacted in an ensemble, and how they soloed. I think it’s the best way to learn.

The second best would be transcribing (both written and by ear) the masters from recordings. I’ve learned so much from analyzing musicians’ playing. It’s a great way to gain a deeper understanding of their concept and it helps me to expand my vocabulary on the drum set. I love to transcribe drum solos as well as comping. Tasteful comping is often overlooked yet it’s vital to a solid swinging rhythm section.

I try my best to maintain a level of consistency when it comes to practicing. Sometimes it can be challenging if I’m busy or if I’m traveling, but I try to play the drums every day. One of my favorite things to do is to learn new music in preparation for a performance. I love studying charts, making notes, and listening intensely to recordings and at first, copying exactly what the drummer played on a track. Then practicing a tune over and over until I can internalize the composition and interpret it in my own way.

Brubeck Jazz Summit: Tell us more about your instructor style.

Sylvia Cuenca: Each student is unique and has a different level of skills and playing experience. Initially, I’ll listen to a student play to assess their strengths and weaknesses. I like to review fundamentals to make sure the student has a solid foundation in basics. Then I’ll address ways to develop their weaknesses and help them to achieve their musical goals. I also think its important for the student to study and absorb the history of this music and the masters that created this art form. The deeper the understanding of this language, the deeper the musical conversations that we can share.

Brubeck Jazz Summit: Where does this interview find you, and how are you and your family?

Sylvia Cuenca: I flew out to California to play a concert in the SF Bay Area on March 15th. Shortly after I arrived all of my work on both coasts got canceled. I’m very close to my family so when they put seniors on lockdown it was a no-brainer for me. I had to stay and take care of my elderly parents. I’ve been here since early March and right now I’m not sure when I’ll return to NYC, but I will get back there as soon as I can even though I know it will be a different NYC.

Life on lockdown in San Jose has been interesting. A typical day usually consists of taking care of my parents, and with the small windows of time that I have to myself, I try to stay focused and continue to practice/study drums and workout. I always feel more centered if I make time for these two disciplines. I’m also an adjunct professor at Columbia University in NYC so I’ve been giving some private Zoom lessons from home.

My first instrument was guitar and I’m a huge fan of Brazilian music so I’m trying to teach myself how to play very basic bossa nova progressions. I also recently bought a keyboard to learn more about jazz theory, playing standards, and composing. I basically want to develop my listening skills to become more of a well-rounded musician. I like to challenge myself to grow. I think the more that you learn musically, the more you can contribute on the bandstand. Physically I like to be active and try to stay in shape. In NYC I usually workout at a gym or take cross-fit classes. Since gyms are shut down over here I get my exercise from hiking, running, bike riding, and my new found passion of gardening!

More than ever it’s important to take care of ourselves physically and spiritually during this stressful time. Feeling lucky to be on lockdown in California because the sunshine here sure helps!!

Brubeck Jazz Summit: Thank you, Sylvia. Any parting thoughts for us?

Sylvia Cuenca: The great Clark Terry used to say “Keep on Keepin’ On”. These words seem appropriate for the pandemic situation we are dealing with right now. We have to persevere and come out of this better than we were before.

Stay in touch with Sylvia through her social media outlets: